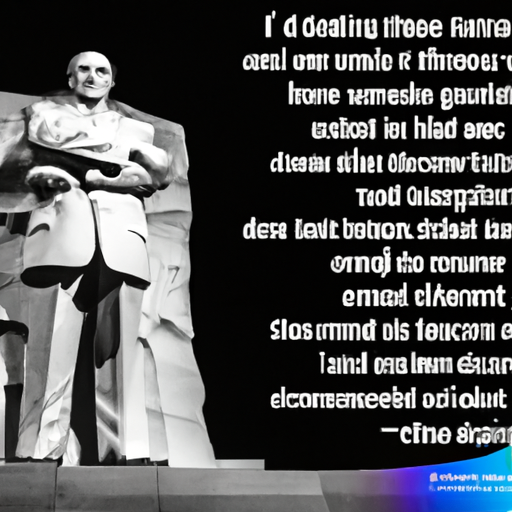 Question: Provide a 25 sentence summary or description on the martin luther king i have a dream speech

Martin Luther King Jr. delivered a powerful speech on August 28, 1963, during the March on Washington for Jobs and Freedom in Washington, D.C. In the speech, King addressed racial injustice and the need for equality across the United States. He shared his hope for a day when people of all races and backgrounds would live together in peace and harmony. King emphasized that this dream of equality was deeply embedded in the United States Constitution and Declaration of Independence. He spoke of racial injustice and the brutality of Jim Crow laws, and his belief that African Americans should be given the same rights as all other Americans. He called on the government to enact laws to guarantee all citizens the same civil and economic rights, and urged African Americans to engage in nonviolent protests. He noted that African Americans had been denied the right to vote and were subjected to economic inequality. King declared that he had a dream of a nation where individuals of all races, creeds, and colors would stand together as equals and would be judged by the content of their character and not the color of their skin. He declared that one day, sons of former slaves and sons of former slave-owners would sit down together and recognize their common humanity. He also declared that one day, injustice and racism would be abolished. King's powerful words resonated with the audience and remain the most well-known words of any civil rights leader.

description equality summary Martin Luther King I Have a Dream Speech Civil Rights Racial Justice
This article was generated in part by GPT-3, OpenAI’s large-scale language-generation model, answering user 's question. Images were generated with OpenAI's AI model, DALL·E 2. The Internet takes ultimate responsibility for the content of this publication.
If you want your question answered by an AI, click here.