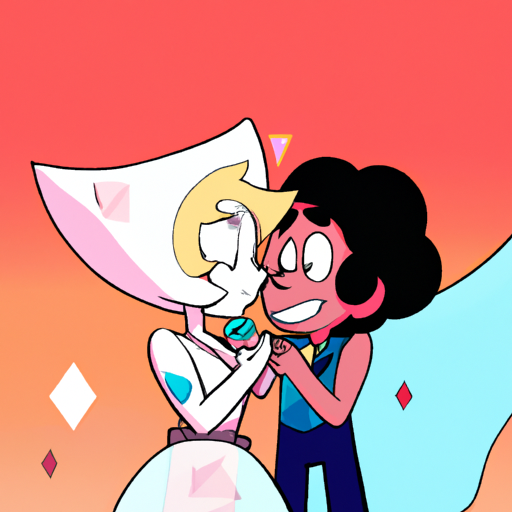 Question: Tell me a story on how pearl and Steven fall in love and get married and have a baby, from Steven universe show

Once upon a time, there was a boy named Steven. He lived in Beach City, the home of the Crystal Gems; three magical beings, who protected the Earth from unknown threats. One day, a mysterious pink-haired girl – who went by the name Pearl – arrived at the beach. Steven quickly realized she was different from other people and developed a strong fascination with her. He was always intrigued by her mysteriousness and would often watch her from a distance, just wanting to get to know her better. The two of them grew closer and eventually, Steven asked Pearl if he could spend more time with her. She agreed, and the two started to spend more time together. They became best friends and eventually grew in love. Both of them couldn’t wait to show their love to each other. Steven proposed to Pearl and she happily said yes. Everyone was extremely happy for them and the couple had the most amazing wedding ever. Soon enough, Pearl and Steven had a beautiful baby daughter. They named her Rose, after Steven’s mother. The two were over the moon and their happiness was shared by everyone. Since then, Pearl and Steven got to live every day in pure bliss and harmony. They were a happy family and nothing made them happier than seeing their daughter grow up with the unconditional love that their relationship has given her. The End.